Exhibitions throughout the conference

Jens Galschiøt has kindly lent the conference some of his acclaimed sculptures from the installation “Refugee Ship”.

Jens Galschiot was born in 1954, in Frederikssund. He is married and has three children. Certified as a construction blacksmith in 1978,  he is a self-taught silversmith and sculptor. He settled in Odense in 1973 and opened his 2000 m2 large studio in 1985, which contains a bronze foundry, a workshop, a gallery, and a sculpture park.

Internationally, Galschiot could be characterized as one of the most significant Danish artists of late modernity (after 1980). His artistic production covers a wide field of expression; from jewelry and small dainty figures to gigantic, politically charged sculptures. He is among the best-known Danish artists abroad. His reputation extends from Hong Kong and Mexico, through to Germany, Spain, and U.S.A. Apart from clothing sculptures Jens Galschiot creates international happenings to highlight the present imbalance in the world. 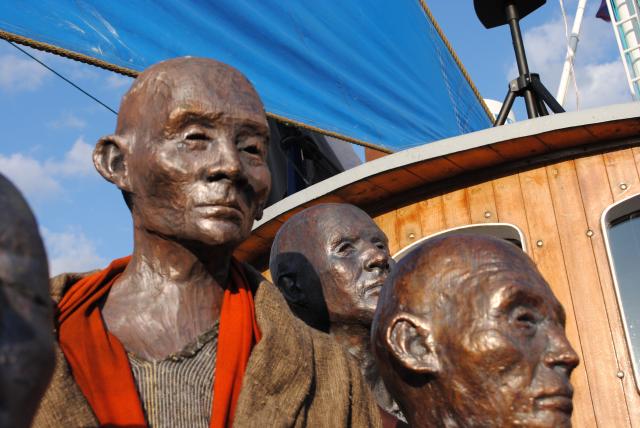 See the video about this art project.

In 2015 at 22 years old Aske left his education, house, job and social life in Denmark, to pursue his dream of exploring the world; making art and social projects where they’re naturally needed. He managed to travel around Europe living with people he met on the way.

A few months into his travels he found himself in Calais, France, where the sight of the neighbouring Refuge camp would change his life forever. At the moment Aske is back in Denmark working as an intern at sculpture and activist Jens Galschiøt, while traveling around Denmark with his talks and art exhibitions.