Background:
“2016 started with a move to force all volunteers and charities helping refugees in Greece to register with the police. This might not sound unreasonable, except for three important points:

Firstly, a lot of the help people need—whether it’s giving lifts to get vulnerable people out of the cold or cooking for starving families without waiting for Greek bureaucracy to catch up with its paperwork—all this is against the law. This is part of the reason why independent volunteers are so important…. Big aid agencies can’t even provide for the most basic needs because of the rules. Part of what creates this inhumane situation is a lack of self-responsibility.

As an independent volunteer with twenty blankets, you know if you don’t distribute them there will be at least 20 people freezing to death and that’s on your conscience. If you work for UNHCR and you have 200 blankets but are forbidden to give them out, the order comes from higher up so your conscience doesn’t come into it. Instead of questioning, they put the responsibility outside of themselves, which is comfortable and convenient.

The second point is that over half the Greek police force support the neo-Nazi Golden Dawn Party, so volunteers are effectively flipping a coin as to whether they’re sharing sensitive information with an armed fascist.

Thirdly, volunteers are now being refused registration left, right and centre. This is not just about elbowing out the political activists; even Clowns Without Borders failed to make the cut, and were denied access to Lesbos’ main refugee camp.”
~ Marienna Pope-Weidemann

Outline of workshop:
Students and teachers have worked as independent volunteers on Chios, Greece in March 2016. They share their experiences and give practical advice to people who would like to do something similar. 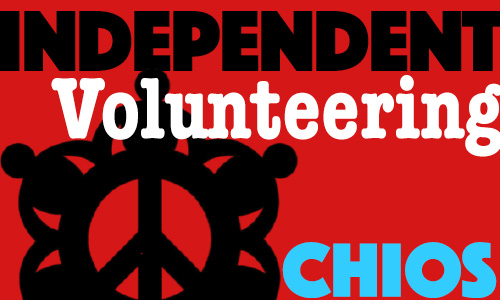